We are currently interested in the catastrophic failure of carbon-black filled and unfilled elastomers submitted to monotonous loadings (not fatigue). First part of this work is to establish a clear criterion for mode I catastrophic fracture when it happens. For this purpose, single edge notch tension tests were run on three different materials, an unfilled styrene butadiene rubber (SBR), a 50 phr carbon-black filled SBR and unfilled natural rubber (NR). Notches were razor hand-made. When notches are smaller than 1/5 of the specimen width, Mode I catastrophic failure occurs and smooth mirror surface are revealed along the crack path. For longer notches, the crack propagation is slower and rough surfaces are observed. More over, the paths followed by the cracks bifurcate for the carbon-black filled SBR specimens. These elements are in favor of mixte mode fracture propagation occurance. 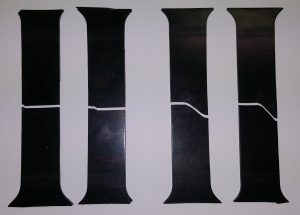 An attempt to apply Griffith analysis for samples presenting an small initial cut has been unsuccessful for the fact that the recorded force-elongation curves do not depend on the initial crack length (Figure 2). This observation is in favor of a small value for the critical energy release rate within the experimental noise. However, one notices that the stretch at break decreases when increasing the length of the notch. 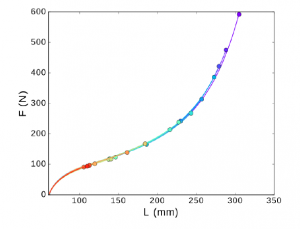 Another option to reach the critical energy release rate (Gc) could be to apply the expression introduced by Rivlin and Thomas [Rivlin, RS, Thomas, AG (1953) Rupture of rubber. I. Characteristic energy for tearing. J Polym Sci 10:291-318.]

with with a the length of the initial cut, Uc the critical stored elastic energy density, and K a factor depending on the macroscopic stretch at break. There are two difficulties to apply this expression without further investigations 1) it was never proven to be right for filled rubbers 2) it provides with a large uncertainty for Gc.

The next step is to run test in pure shear tests in order to compare the critical energy release rate values obtain in SENT using Rivlin and Thomas expression and in pure shear. This work should help deciding the relevance of the mentioned equation.

The main author of this work is David Roucou, PhD student hired by Michelin and co-advised by me and Mathias Brieu.

Mechanics of Polymers. All Rights Reserved