Bouncing balls: An illustration of the viscoelasticity and temperature dependent behavior of polymers

Why are we playing with rubber bouncing balls when we are kids ? Can metal or ‘plastic’ balls bounce as well ? And why do squash players warm up their balls before starting the game ? Let us have a little of recreation time bouncing balls and answer these questions.

For that, some polymer balls are made in lab. The polymer is an acrylate network that is crosslinked by photo polymerization within spherical glass beads. The polymer has a glass transition temperature around 46 °C, so the polymer is in the glassy state at room temperature.
A little set up is built to drop the polymer balls on a granite block. The duration of contact and the contact force during the rebound are measured with a piezoresistive captor plugged to an oscilloscope. The material coefficient of restitution (COR), characterizing how well the balls bounce is measured by mere acoustic technique. The COR is equal to the ratio of the velocity at impact over the velocity after impact. While the former is calculated knowing the height at which the ball is dropped, the latter is estimated by recording the lap of time during the two first bounces. Tests were run for temperatures ranging from 0 to 180 °C to cover the all range of behavior for the polymer from elastic glassy through viscoelastic and to elastic rubbery. Below is a video illustrating the temperature dependence of the rebounds: 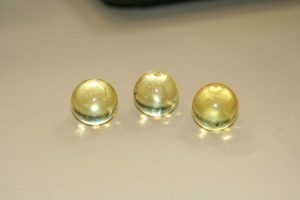 Video of ball bouncing vs. temperature

Experimental results are shown below. First we may discuss the COR with respect to temperature. As it is expected at high temperatures, when the ball is in the rubbery state, it bounces well (it is the case of the rubber balls children are playing with). One notes that at low temperature, in the glassy state, the ball bounces as well and this is due to the material nearly elastic behavior. What differs between rubbery and glassy bounces? Durations and forces of contact. The rubbery balls deform much more upon contact. In the glass transition temperature range, the material is more or less viscoelastic and therefore some of the energy is dissipated during the rebound and the ball rebound may be very small as shown in the video. Reading the COR shape of the curve, one understands why the squash balls are warmed before a game, it is actually to get closer to the rubbery plateau providing higher rebounds. 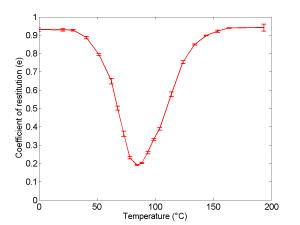 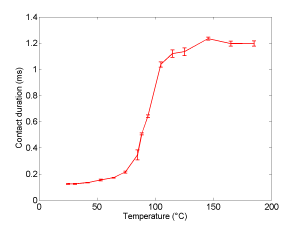 Figure 1. Experimental measures of COR and duration of contact with respect to temperature.

In order to simulate the bounces, the linear viscoelasticity and time-temperature superposition property of the material were characterized by classic DMA tests. The material parameters were used in the thermorheologically simple (TRS) viscohyperelastic law from Simo that is implemented in the Abaqus finite elements code. Explicit simulations were run to simulate bounces according to the temperature and the coefficient of restitution with respect to temperature, the duration and force during the rebounds were compared to the experimental results. Satisfactory prediction of the ball rebound is shown in the Figures below. 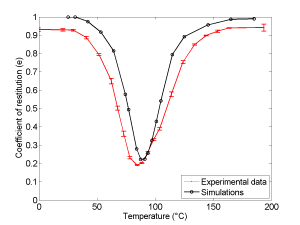 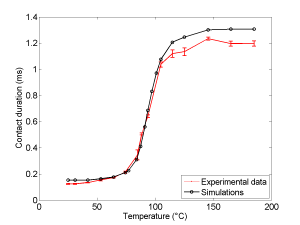 Figure 2: Comparison between experimental measures and simulation of the COR and the duration of contact.

Figure 2, one notes that simulations overestimate slightly the COR especially on the rubbery and the glassy plateaus. Actually the polymer is never exactly elastic while the constitutive equations are set for elastic behaviors in the rubber and the glassy states. As mentioned earlier the force of contact is very dependent of the temperature. Figure 3 shows the force of contact with respect to time during contact at room temperature and in the glassy state. One notes the force about nine times larger at room temperature than at high temperature. This explains why children use rubber bouncing balls for that on top of bouncing well they are less dangerous than other elastic balls. 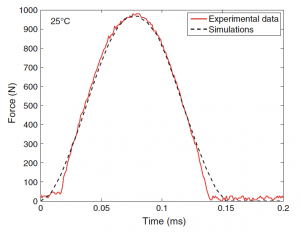 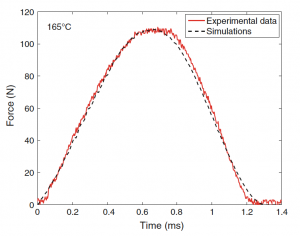 If interested more details on this study may be found in a paper published here. This work was co-authored by Dr. Pierre Gilormini and master student Gerry Agbobada.